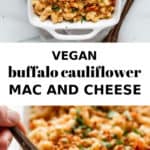 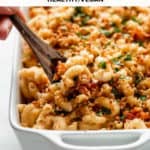 This Vegan Buffalo Cauliflower Mac and Cheese is loaded with buffalo spiced roasted cauliflower, gluten-free macaroni noodles and gets up in a vegan cheesy sauce!

Other confession: I DO love eating all the Super bowl inspired foods.

So in the spirit of tasty game night foods, I bring you this vegan buffalo cauliflower mac and cheese. Which I’m going to enjoy eating on Super Bowl Sunday curled up on the couch probably watching the latest comedy special on Netflix (or anything else that is not the Super Bowl…)

Either way, this recipe is great for any occasion. Game night, Weeknight dinner, Weekend cozy lunch…whatever! You do you friends!

I’m so excited to share this recipe today because this is like mac and cheese gone wild. We’re taking vegan mac and cheese, and giving it a big punch of flavour with some hot sauce, and layering it with roasted bits of buffalo cauliflower, then baking it off with a breadcrumb topping. #YAS.

How to make buffalo cauliflower:

Buffalo cauliflower has become so popular and there are a few different ways to make it depending on your preferences. For one, you can batter it up (like I do in this bang bang cauliflower recipe) and then bake it up so each piece of cauliflower has a nice battered crispy coating. You can also batter up the cauliflower and fry the florets in a pan with oil so they get super crispy. (Though a bit less healthy)

But for today’s recipe, we’re going with just simple roasted buffalo cauliflower. Why? Because we’re going for simple and healthy here. (But if you prefer to do one of the above options, more power to you!)

To make the buffalo cauliflower, simply roast the cauliflower florets and then toss them in some Frank’s red hot sauce. Then they go back in the oven for additional 10 minutes and we’re done! The roasted buffalo cauliflower is delicious on it’s own, so you can definitely make some extra to serve on the side.

A few notes on the recipe:

This vegan buffalo cauliflower mac and cheese is really simple to make, which is why I love it so much!

Once the buffalo cauliflower is prepared, all you have to do is layer it up in a baking dish with your cooked macaroni, tossed in the creamy vegan “cheese” sauce. The sauce is made with a base of raw cashews (make sure to use raw unsalted cashews!) and nutritional yeast to give it that umami flavour.

If you’d like to get a little more fancy you can add some shredded cheese (vegan or non-vegan, whatever works for you) to the cheese sauce too for a little extra pop of flavour!

I use whole-grain gluten-free macaroni for this recipe, but you can use any type of pasta/shape of pasta you like! Shells, fusilli, and penne also work great for a mac and cheese!

I use Frank red hot sauce in this recipe, which isn’t particularly spicy, but if you’re not a fan of spice and still want to make this mac and cheese, just leave out the hot sauce from the cauliflower and the sauce and you can make this into a vegan roasted cauliflower mac and cheese instead!

Top off this mac and cheese with some fresh cilantro!

If you tried this Vegan Buffalo Cauliflower Mac and Cheese or any other recipe on the blog let me know how you liked it by leaving a comment/rating below! Be sure to follow along on Pinterest, Instagram and Facebook for even more deliciousness!

This post contains affiliate links which means I will make a small commission if you purchase through those links. I only recommend products that I know, trust and love!
Fall Gluten Free Grain-free Lunch & Dinner Pasta & Noodles Recipes Refined sugar-free Vegan Vegetarian Winter