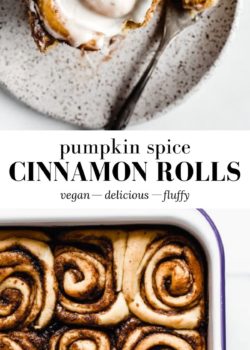 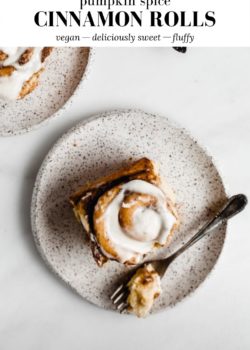 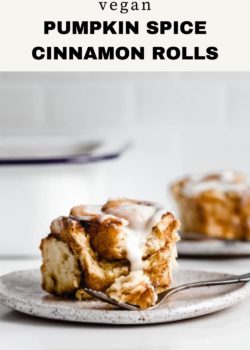 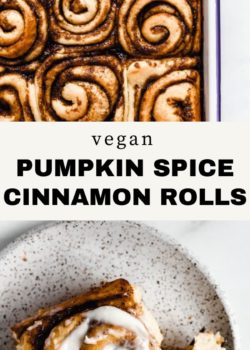 These Vegan Pumpkin Spice Cinnamon Rolls are the ultimate Fall comforting treat. They’re similar to a traditional cinnamon roll but made with pumpkin puree and pumpkin spice for a treat that’s extra special!

If there’s one treat that I just can’t resist, it’s cinnamon rolls. They’re fluffy and doughy, loaded with cinnamon sugar flavour and topped off with icing…I mean, does it honestly get any better than that?

This Fall I wanted to make a recipe that puts a little twist on the classic cinnamon roll and make some Vegan Pumpkin Spice Cinnamon Rolls. If you love pumpkin spice, then you are going to love this dessert! Make sure to also start your day off with some cinnamon roll baked oatmeal this Fall too!

If you want to prepare these cinnamon rolls in advance for a later time, Prepare the rolls and cut them into 2-inch slices. Then place them in a pan and cover them well. Place them directly in the freezer.

You can store these in the freezer for up to 3 months. When you’re ready to enjoy, remove them from the freezer and let them defrost on the counter. Place in the oven to bake for about 30-35 minutes. If the rolls are a bit cool, they may take slightly longer to bake.

Say hello to your new favourite Fall treat! Vegan Pumpkin Spice Donuts are soft, gooey on the inside and filled with pumpkin spice flavor!

Make sure the almond milk is just slightly warmed (about 110 degrees F) otherwise the yeast won’t bloom. Make sure to also use a fresh pack of yeast.

Use room temerpature butter to make the pumpkin spice filling.

Dental floss will give you really even and clean cuts when making these buns.

If you tried these Vegan Pumpkin Spice Cinnamon Rolls or any other recipe on the blog let me know how you liked it by leaving a comment/rating below! Be sure to follow along on Pinterest, Instagram and Facebook for even more deliciousness!

This post contains affiliate links which means I will make a small commission if you purchase through those links. I only recommend products that I know, trust and love!
Desserts Fall Gluten Free Recipes Vegan Vegetarian