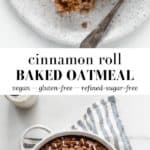 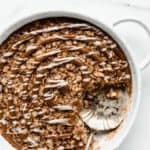 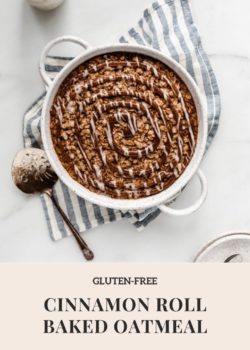 This Cinnamon Roll Baked Oatmeal is filled with warming cinnamon spices and baked to fluffy perfection. It’s like enjoying a cross between a cozy bowl of oatmeal and a cinnamon roll for breakfast, all while gluten-free and naturally healthy!

There’s nothing better in the fall than having a warm and cozy breakfast filled with warming fall spices.

Cinnamon is a classic spice to use in fall and is so delicious, in anything from Cinnamon Roll Apple Bread to Roasted Sweet Potato Cinnamon Soup!

Today’s recipe features a soft and delicious baked oatmeal loaded with cinnamon, coconut sugar and a hint of nutmeg. It’s then topped off with a cinnamon swirl sugar and an optional drizzle of coconut butter for an oatmeal that really has all the flavours you love from a cinnamon roll!

This Cinnamon Roll Baked Oatmeal is perfect to serve up for a weekend brunch and will make your home smell amazing as it bakes!

Does baked oatmeal need to be refrigerated?

Baked oatmeal is best enjoyed right away, but if you have leftovers you can keep it stored in the fridge for 2-3 days. Because of the eggs in this (unless you choose to use a flax egg), I wouldn’t recommend storing baked oatmeal on the countertop.

You can also prepare the batter ahead of time and keep that stored in the fridge overnight to bake in the morning. If you do this, you will need to add an extra 1/3 cup of liquid, since the oats will absorb a lot of the liquid overnight!

Mix all the ingredients together in a large mixing bowl, then let the mixture rest on your countertop for 5 minutes. The oats will start to absorb a bit of the liquid during this time.

Pour the mixture into a baking dish and bake for 35-45 minutes until golden brown on top. Remove the baked oatmeal from the oven and let it cool for 10 minutes before you add the cinnamon swirl. (If you add it while the oatmeal is still hot, it will ooze out and won’t create a nice swirl.)

Mix the cinnamon swirl mixture together and use a piping bag or ziplock bag with the tip cut off to make a swirl all around the oatmeal. You can alternatively just drizzle it across if it’s easier. Optionally, drizzle of melted coconut butter on top then serve.

Leftovers will store well in the fridge for about 2 days. But baked oatmeal is best enjoyed fresh!

A baked oatmeal that tastes just like a cinnamon roll. Healthy and perfect for a cozy morning!

Use rolled oats, not quick oats for this recipe. Rolled oats will hold their texture better.

Let the mixture sit on the counter to thicken for 5-10 minutes. Don’t skip this step! This will allow the oats to start absorbing the liquid before baking.

Let the baked oatmeal cook before adding the cinnamon swirl, otherwise it will just melt into the oats.

If you tried this Cinnamon Roll Baked Oatmeal or any other recipe on the blog let me know how you liked it by leaving a comment/rating below! Be sure to follow along on Pinterest, Instagram and Facebook for even more deliciousness!

This post contains affiliate links which means I will make a small commission if you purchase through those links. I only recommend products that I know, trust and love!
Baked Goods Breakfast Fall Gluten Free Oats Recipes Refined sugar-free Snacks Spring Vegan Vegetarian Winter