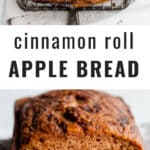 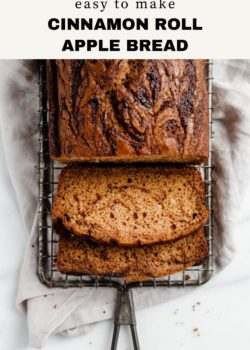 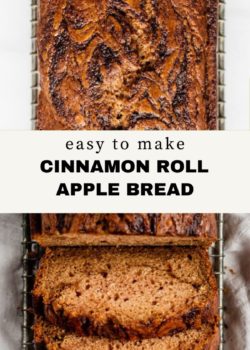 This cinnamon roll apple bread is bursting with apple flavour and finished off with a swirl of cinnamon roll filling! It’s easy to make and the perfect quick bread to enjoy for Fall with just the right amount of sweetness.

What do you get when you cross an apple bread with a cinnamon roll? CINNAMON ROLL APPLE BREAD.

Yeah. you heard that right. We’re taking a good old regular apple bread and giving it some with recipes ? And who doesn’t love a cinnamon swirl? After we kept things pretty simple with this healthy maple pumpkin bread, so let’s mix it up a bit!

While I like to treat myself to the occasional cinnamon when it’s just any regular weekday I try and find some alternative *healthier* options. So today we’re getting our swirl on and making a healthier cinnamon roll filling to swirl all up in our apple bread. And let me tell you, it may not be a tin can cinnamon roll, but damn is it still good!

This Apple bread is

Store any leftovers of this Cinnamon Roll Apple Bread covered on the countertop for up to 4 days or in the fridge for up to 7 days. This bread is freezer-friendly and can be stored in the freezer for up to 2 months. Just wrap it tightly with plastic wrap and place it into a freezer-safe bag.

If you tried this Cinnamon Roll Apple Bread or any other recipe on the blog let me know how you liked it by leaving a comment/rating below! Be sure to follow along on Pinterest, Instagram and Facebook for even more deliciousness!

This Cinnamon Roll Apple Bread is loaded with homemade applesauce and a cinnamon roll swirl. YUM!

Store leftovers covered on the counter for up to 5 days or in the fridge for up to 7 days.

If you want to save time, you can use store-bought apple sauce.

Don’t overmix the batter, this can lead to dense bread. Just mix gently until combined.

This post contains affiliate links which means I will make a small commission if you purchase through those links. I only recommend products that I know, trust and love!
Baked Goods Breakfast Desserts Fall Recipes Refined sugar-free Refined sugar-free Snacks Vegetarian