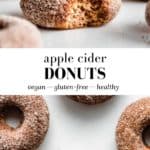 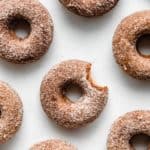 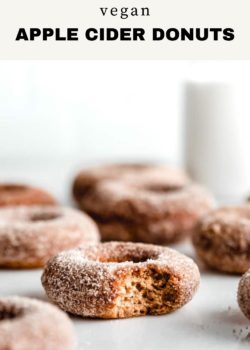 When I think of September, there’s one ingredient that comes to mind: apples! I love their crisp and sweet flavour in dishes like this Healthy Apple Crisp and these Apple Pie Bars.

However, I don’t always have whole apples on hand. So, I wanted to share an apple dessert recipe that is light, fluffy and uses apple cider rather than whole apples!

You can buy apple cider (or fresh-pressed apple juice) at most grocery stores throughout the year, so you can make these donuts any time you like! Do your best to find one without a lot of added sugar, as these donuts will already be pretty sweet on their own!

In one bowl mix together the flour, sugar, baking powder, baking soda, salt, cinnamon and nutmeg. Mix together so there are no clumps.

Use a piping bag (or a large ziplock bag with the tip cut off) to pipe the batter into the donut mould, filling the moulds 3/4 of the way full. The donuts will rise as they bake so make sure not to overfill with batter.

Bake in the oven at 400 degrees F for 8-10 minutes. Then remove from the oven and let the donuts cool slightly in the pan before removing.

Fill a large ziplock bag with cinnamon and sugar. Spray each donut with some coconut oil cooking spray, then place one donut at a time in the bag and shake. Repeat until all the donuts are covered!

If you tried these Vegan Apple Cider Donuts or any other recipe on the blog let me know how you liked it by leaving a comment/rating below! Be sure to follow along on Pinterest, Instagram and Facebook for even more deliciousness!

A heavenly apple cider donut that is baked rather than fried and comes together in 30 minutes!

Make sure to use apple cider and NOT apple juice in this recipe.

Don’t leave out the apple cider vinegar. You can substitute white vinegar if needed. The vinegar reacts with the baking soda to create a light and fluffy donut.

Don’t overmix the batter. If you do you will end up with tough donuts, rather than light and fluffy donuts.

Store in an airtight container on the counter for up to 2 days.

These donuts are best enjoyed the same day they are made.

If you tried these Vegan Apple Cider Donuts or any other recipe on the blog let me know how you liked it by leaving a comment/rating below! Be sure to follow along on Pinterest, Instagram and Facebook for even more deliciousness!

This post contains affiliate links which means I will make a small commission if you purchase through those links. I only recommend products that I know, trust and love!
Baked Goods Breakfast Desserts Fall Gluten Free Recipes Snacks Sweets Vegan Vegetarian