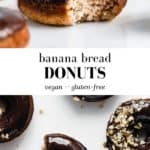 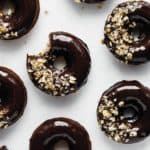 These Vegan Banana Bread Donuts are light and fluffy and packed with delicious banana flavour. They’re baked rather than fried, and topped off with a delicious chocolate ganache glaze and crushed walnuts!

I always get excited when I have overly ripe bananas in my kitchen because it means I can make some sort of banana baked good! I’ll often whip up a quick batch of Healthy and Easy Banana Nut Muffins, or Vegan Banana Bread, but this time I wanted to get use of my donut pan and make some delicious Vegan Banana Bread Donuts!

The batter for these donuts is a little different than a banana bread, which results in a lighter and fluffier baked treat. (Whereas actual banana bread tends to be a bit denser.)

These donuts are also topped with a chocolate ganache glaze and crushed walnuts which makes them taste even more amazing!

Use overly ripe bananas in this recipe for best results and flavour.

We add some apple cider vinergar to the almond milk to turn it into a “buttermilk” which reacts with the baking soda and creates really light and fluffy donuts. You can leave the vinegar out if needed, but the donuts will be slightly denser.

Keep an eye on the donuts in the oven, they cook rather quickly!

If you tried these Vegan Banana Bread Donuts or any other recipe on the blog let me know how you liked it by leaving a comment/rating below! Be sure to follow along on Pinterest, Instagram and Facebook for even more deliciousness!

This post contains affiliate links which means I will make a small commission if you purchase through those links. I only recommend products that I know, trust and love!
Desserts Fall Gluten Free Recipes Spring Vegan Vegetarian Winter