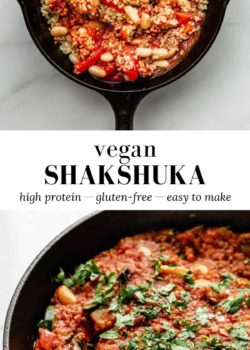 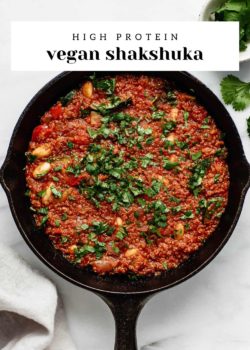 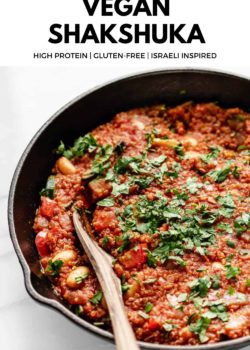 This Vegan Shakshuka recipe is a twist on the Israeli classic that is made with quinoa, red peppers and beans for a protein-rich breakfast!

It’s time to spice up your morning breakfast with some Vegan Shakshuka! Seriously, this recipe has been on repeat in my kitchen all week. Usually, I’m more of a dessert for breakfast kind of girl, (cue banoffee pie chia pudding) but lately, I’ve been craving some more warming savoury breakfasts.

If you’ve never tried shakshuka before, It’s a dish typically made with poached eggs in a sauce of tomatoes and peppers. It can be eaten on its own or served with some crusty bread or pita.

If you’re wondering where Shakshuka is from it originated in Tunisia, and is popular in middle eastern cuisines. I discovered Israeli shakshuka for the first time in Israel.

How to make vegan shakshuka

The recipe starts off by sauteing some onions and garlic in oil and then adding some red peppers to the mix. Next come the spices, sauce, beans and quinoa.

Mix everything together and let it simmer on low for 10 minutes.

It’s a super simple recipe that can be thrown together quickly, which is honestly the biggest appeal of it.

There are so many different ways to make a vegan Shakshuka. Since the traditional dish is egg-based, the possibilities are really ended for the vegan version:

This vegan shakshuka stores great! Store it in the fridge in a container for up to a week and reheat it on the stove or in the microwave.

This recipe can also be frozen. Defrost on the countertop.

If you tried this Vegan Shakshuka or any other recipe on the blog let me know how you liked it by leaving a comment/rating below! Be sure to follow along on Pinterest, Instagram and Facebook for even more deliciousness!

This vegan shakshuka is loaded with quinoa and white beans for a protein-rich delicious breakfast!

Make this dish directly in the pan you want to serve it in.

For the best flavour, season every layer. It’s always good to add a little pinch of salt to each layer (i.e. the onions, the veggies, the quinoa…etc.) as you go to flavour the dish.

Use a high-quality can of crushed tomatoes. This will have a big impact on the final taste of the dish.

This post contains affiliate links which means I will make a small commission if you purchase through those links. I only recommend products that I know, trust and love!
Breakfast Fall Gluten Free Lunch & Dinner Recipes Refined sugar-free Savoury Vegan Vegetarian Winter

« Previous PostWhy We Switched to Flodesk
Next Post » Turmeric Rice