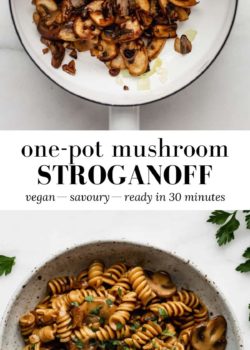 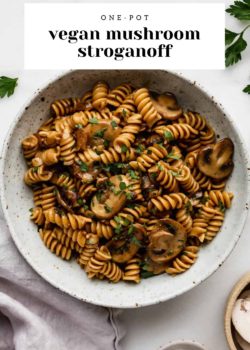 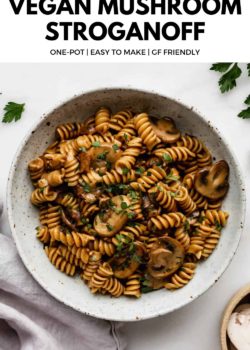 This One-Pot Vegan Mushroom Stroganoff comes together in under 30 minutes and is perfect for a deliciously savoury meal with minimal clean-up! You can enjoy this with any pasta you love and make it gluten-free if needed!

This Mushroom Stroganoff is

What is Mushroom Stroganoff?

Mushroom Stroganoff is a vegetarian (or vegan) friendly version of the traditional Russian dish Beef Stroganoff.

This recipe for One-Pot Vegan Mushroom Stroganoff is made by sautéing mushrooms in a pot with garlic and onions that form the base flavour of the dish. Then pasta then gets cooked up in the mushroom and broth mixture to absorb all that amazing flavour. This dish is also a 30-minute meal making it great for busy weeknights.

I love making this recipe when I want some comforting, that is packed with flavour and has an easy clean-up.

I prefer this one-pot stroganoff to a stroganoff where you cook the pasta separately because in this recipe, the pasta absorbs all the flavour from the stroganoff since it cooks in the sauce. Plus who doesn’t love a one-pot meal?

This recipe is also nut-free, coconut milk-free (unless you optionally want to add a splash at the end) and can be easily made gluten-free if needed.

Onions & garlic: This forms much of the base flavour of our stroganoff. Make sure to use fresh onions and garlic, don’t substitute these with dried spices!

Mushrooms: we can’t make this recipe without them! I use cremini mushrooms for this recipe, sliced. But you can also use baby Bella mushrooms, portobello mushrooms, or a mix of your favourite mushrooms.

Flour: A small amount of flour is used to thicken the sauce for this recipe. You can use regular flour, whole-grain flour, or gluten-free flour. Any kind of flour will work here.

Veggie stock: Some vegan mushroom stroganoff recipes use a vegan “beef broth,” which can be a bit hard to find at your local grocery store. So to keep things simple, we’re using veggie stock.

Pasta: A short-grain pasta like rotini works best for this recipe!

Mushrooms have a high water content, which can make them a little tricky to cook. Mushrooms can often become soggy when cooking, which is not what we’re going for. Luckily, there are a few common mistakes you can avoid while cooking mushrooms to get caramelized and flavourful sauteed mushrooms.

How to make Mushroom Stroganoff Vegan

Sautee the garlic and onions in a pot on medium-high heat until translucent (about 1-2 minutes) then add the mushrooms to the pot.

Tip: You can use a variety of different mushrooms for even more umami flavour.

Sautee the mushrooms until browned, (make sure not to add any salt while sauteeing the mushrooms, this will prevent them from browning properly!) then add the flour, seasoning and veggie stock and bring to a boil.

Once the pot is boiling, add in the dried pasta, mix together then cover and let simmer on low heat for about 10 minutes. The pasta should absorb the liquid in the pot and all that delicious flavour.

Tip: using a pasta shape with twists, holes or ridges in it will help the pasta hold onto the delicious sauce better!

Taste the Vegan Mushroom Stroganoff and adjust any seasoning as needed with parsley or additional salt and pepper if needed.

How do you thicken Mushroom Stroganoff?

The most common way to thicken mushroom stroganoff is to create a roux made of one part fat (like coconut oil) to one part flour. This mixture turns into a thick paste that will thicken the stroganoff. Another option that is sometimes used for thickening is cornstarch.

If you want to make this Vegan Mushroom Stroganoff gluten-free, simply use any gluten-free pasta in the recipe in place of regular pasta.

How to Freeze, Store, and Reheat this Vegan Mushroom Stroganoff Recipe

Store any leftovers in a sealed container in the fridge for up to 3 days.

To reheat: Reheat in the microwave, or in a small pot on the stove. When reheating, add a small splash of veggie stock or water to help loosen the pasta.

This recipe does not freeze well. I find the pasta becomes too soggy after being frozen.

Why is it called stroganoff?

Stroganoff is named after one of the members of the Stroganov family. It’s a Russian dish that was originally made with beef.

How do you add flavor to stroganoff?

To make a flavorful stroganoff you want to make sure to use broth rather than water in the recipe. It’s also important to add herbs and salt for extra flavor.

Traditional stroganoff is not vegan and is usually made with butter. However this recipe for Mushroom Stroganoff is a vegan-friendly version!

What’s the difference between stroganoff and goulash?

Stroganoff is a sauce that can be made with beef, pasta, mushrooms or anything else. Goulash is a stew made with meat, vegetables and noodles.

What to serve with Mushroom Stroganoff

If you tried this Vegan Mushroom Stroganoff or any other recipe on the blog let me know how you liked it by leaving a comment/rating below! Be sure to follow along on Pinterest, Instagram and Facebook for even more deliciousness!

This Vegan Mushroom Stroganoff comes together in under 30 minutes and is made entirely in One pot!

Make it creamy: You can add 3 tbsp of coconut cream, cashew cream or a vegan cream to this recipe if you’d like to be extra creamy. I personally don’t find that it needs it!

This post contains affiliate links which means I will make a small commission if you purchase through those links. I only recommend products that I know, trust and love!
30-Minute Meals Fall Gluten Free Lunch & Dinner Pasta & Noodles Recipes Vegan Vegetarian Winter