This vegan beet, potato, and leek soup is a creamy delicious soup with the prettiest shade of red! You’ll love how easy it is to make too! 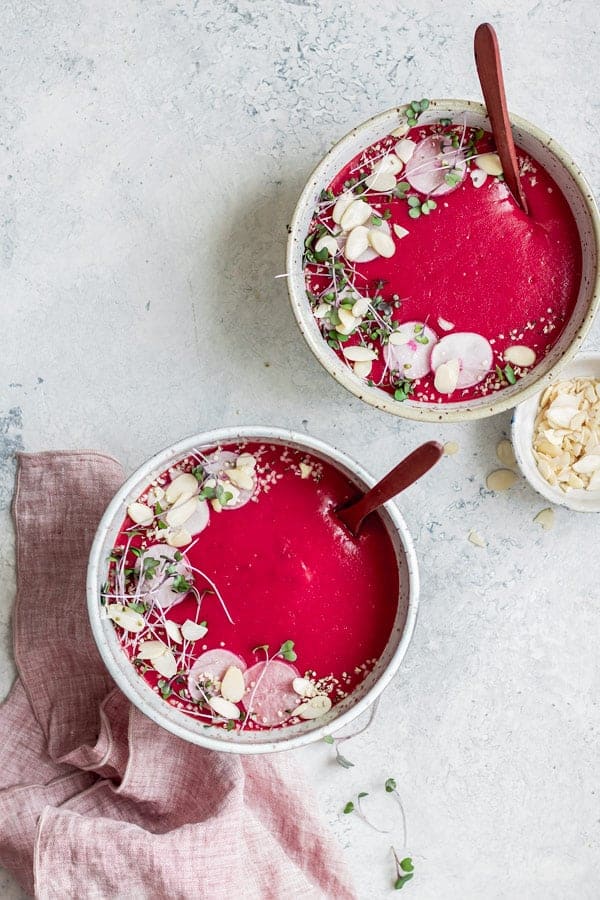 This weekend we got a ton of snow here in Montreal.

And I mean a ton.  I’m talking snowed in and can’t leave the house and sitting around bored and what am I going to do, oh I know I’ll stay in and make a cozy beet soup recipe kinda ton.

But seriously, I was actually snowed in over the weekend because of the storm, and I actually did make this recipe for vegan beet, potato, and leek soup. 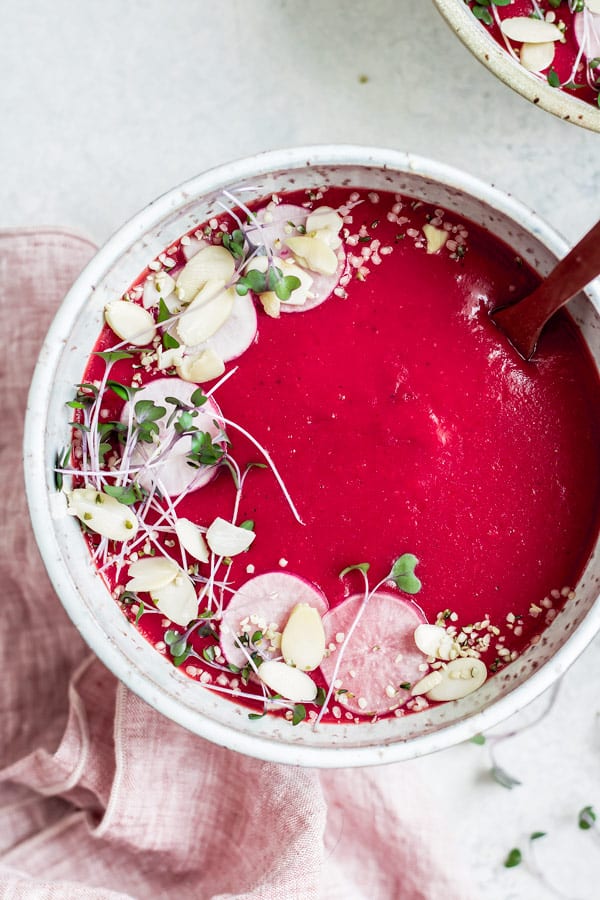 I mean, what else was I going to do?

Well, I did also make a batch of my triple coconut oatmeal cookies too. (Hey, I needed some dessert, okay?)

But back to this soup recipe for a second. I had some beets in my fridge and was trying to figure out something else to do with them other than add them to my salads.

Now, I’m going to be totally honest with you….I’m not the biggest fan of beets.

Don’t get me wrong, I don’t dislike them, but they’re definitely not my favorite vegetable. I find they can often have a really overpowering earthy flavor if they’re not prepared well. 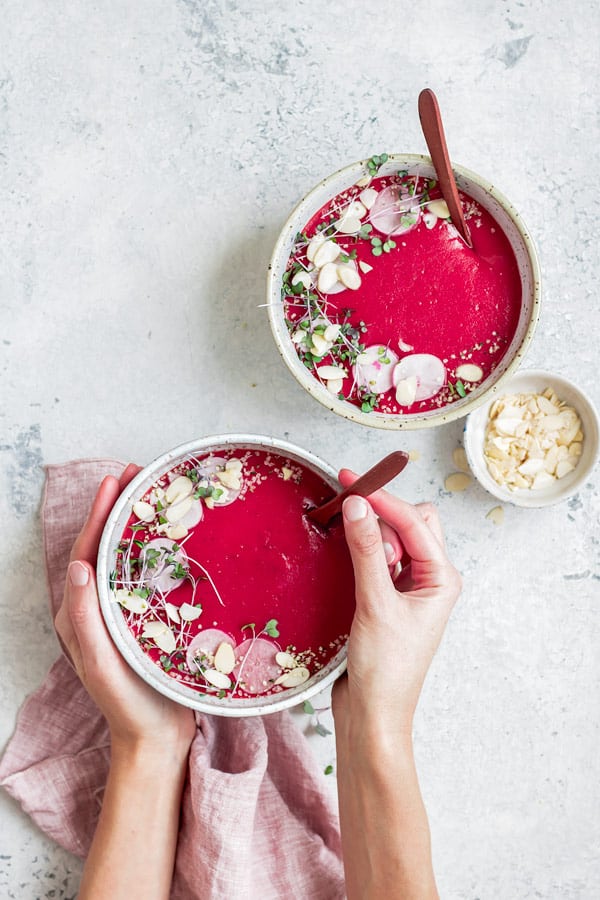 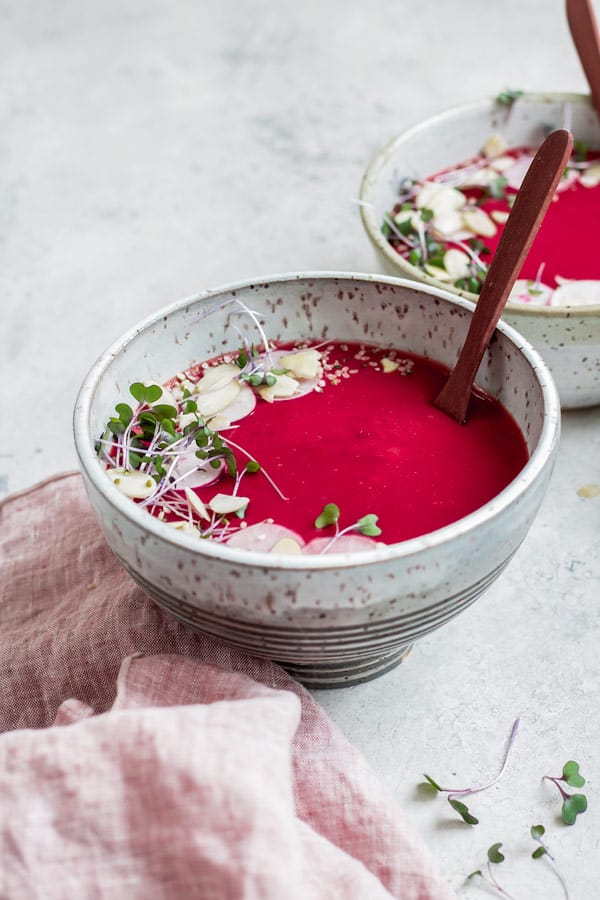 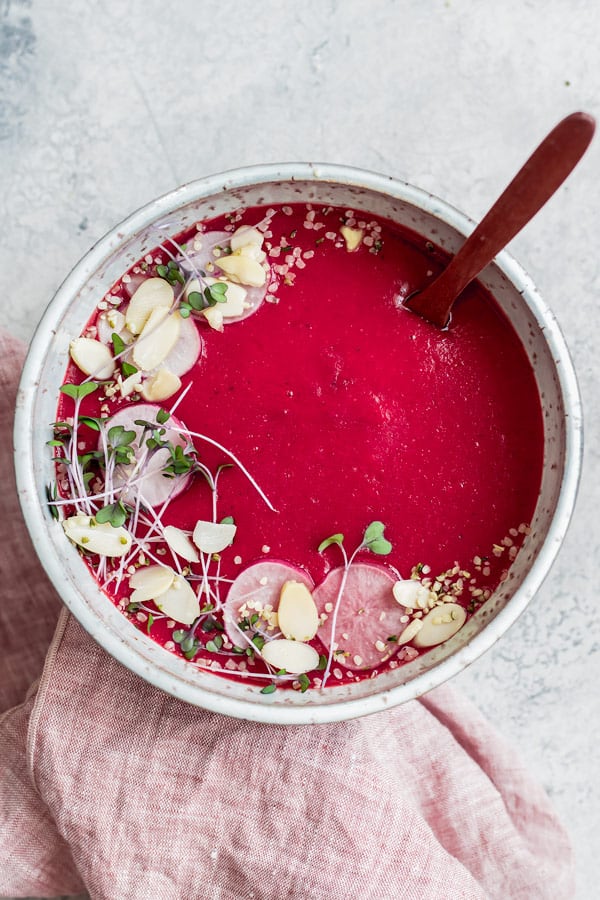 But this soup…this soup you guys!

This soup has no overpowering “beety flavor.” So if you’re not the biggest fan of beets don’t shy away from this recipe! The leeks, onion, and garlic give this soup such a rich flavor, and the potatoes make it thick and creamy.

And let’s not forget about the colour…who doesn’t want to eat such a vibrant soup!

This colorful vegan beet, potato, and leek soup is not only a creamy delicious soup, but also just at beautiful as tasty!

This post contains affiliate links which means I will make a small commission if you purchase through those links. I only recommend products that I know, trust and love!
Gluten Free Recipes Soups & Stews Vegan