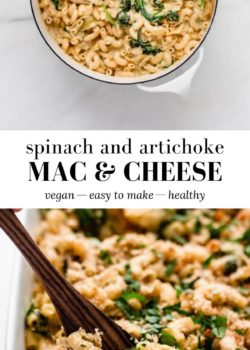 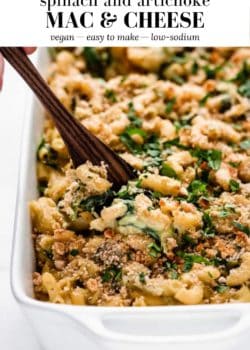 This Vegan Spinach and Artichoke Mac and Cheese is loaded with sauteed spinach and artichokes and made with a creamy cashew “cheese” sauce. It’s easy to make and can also be made gluten-free!

This recipe for Vegan Spinach and Artichoke Mac and Cheese does not disappoint in the comfort department!

It made with veggies and garlic and comes together in a rich creamy sauce that is completely dairy-free. You can serve this mac and cheese recipe directly from the stove, or broil it with some breadcrumbs for an extra crispy topping. Either way, it’s delicious!

Ingredients in vegan mac and cheese

How to make Vegan Spinach and Artichoke Mac and Cheese

Sautee the garlic and spinach in a pot until the spinach wilts down, then add the artichoke hearts and continue to sautee for a couple of minutes.

Make the cheesy sauce by blending the sauce ingredients together in a high-speed blender until smooth and creamy. (Make sure there’s no little bits of cashews remaining.) Then add the cream sauce, followed by the cooked pasta to the pot. Mix everything together on medium heat until the sauce starts to thicken.

Either serve from the pot or optionally transfer to a baking dish topped with breadcrumbs and broil in the oven until the top is crispy.

If you tried this Vegan Spinach and Artichoke Mac and Cheese or any other recipe on the blog let me know how you liked it by leaving a comment/rating below! Be sure to follow along on Pinterest, Instagram and Facebook for even more deliciousness!

This vegan mac and cheese recipe is inspired by spinach and artichoke dip and is simply delicious!

Salt the pasta water. This adds flavour directly into the pasta.

Slightly undercook the pasta. The pasta will continue to cook in the sauce. If the pasta is well-done, to begin with, it may get a bit mushy once cooked together with the other ingredients.

Serve immediately. This dish is best enjoyed right after it’s made.

This post contains affiliate links which means I will make a small commission if you purchase through those links. I only recommend products that I know, trust and love!
30-Minute Meals Fall Gluten Free Lunch & Dinner Pasta & Noodles Refined sugar-free Vegan Vegetarian Winter

10 comments on “Vegan Spinach and Artichoke Mac and Cheese”