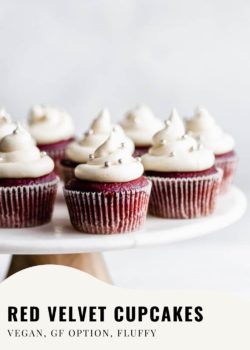 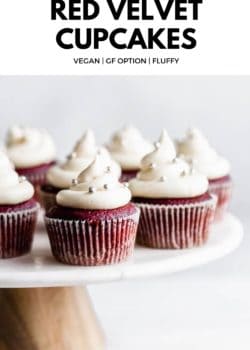 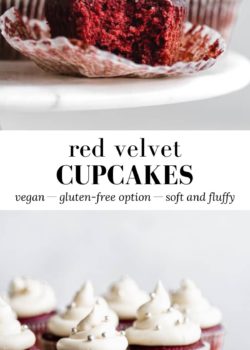 These Vegan Red Velvet Cupcakes with cream cheese frosting are perfect for any occasion. Soft fluffy cupcakes get topped off with a dairy-free whipped cream cheese and coconut cream frosting for a *healthyish* treat!

The air is cold, there’s snow on the ground, it’s dark out at 4 pm…it’s comfort food season!

Really though, anyone else craving more sweets and carbs during winter months? I know I definitely do! Everything from Peanut Butter Cookies to Gingerbread Cake, there’s nothing better than enjoying some sweet treats during the holiday season!

So this winter season, I’m embracing it. That’s right. We’re going full-on yummy sweet treats, but we’ll keep them slightly on the healthier side.

It’s important to check and make sure to use a vegan-friendly red food colouring, since some food colourings contain animal bi-products, and some red colouring comes from a shellac bug.

For this recipe, I like to use beetroot powder, which is 100% natural and gives a beautiful red hue to the cupcakes.

You can also leave out the red colouring entirely, since it is only for show and won’t affect the actual taste of the cupcakes.

These Red Velvet Cupcakes are vegan and make the perfect treat!

If you really want the red colour of the cupcakes to pop, make sure to use enough red food colouring in them.

Only fill the cupcake molds 2/3rds of the way full. The cupcakes will rise quite a bit.

If you tried these Vegan Red Velvet Cupcakes or any other recipe on the blog let me know how you liked it by leaving a comment/rating below! Be sure to follow along on Pinterest, Instagram and Facebook for even more deliciousness!

This post contains affiliate links which means I will make a small commission if you purchase through those links. I only recommend products that I know, trust and love!
Desserts Gluten Free Recipes Snacks Vegan Vegetarian Winter