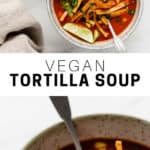 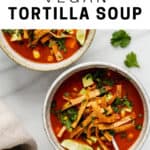 This Vegan Tortilla Soup recipe is healthy and packed with smokey chipotle, black beans and topped off with crispy homemade tortilla chips for a soup that’s packed with flavour!

I love Mexican food. In fact I love it so much that I’ve been to Mexico 5..6..7 times? I don’t know. But dayum Mexican food is seriously one of my favourites.

This past year I’ve adopted a tradition of having #tacotuesdays in my home, and while we don’t make actual tacos every Tuesday, we make something Mexican inspired. (last week’s taco Tuesday dinner was these cauliflower rice burrito bowls)

This week, we’re taking a bit of a different route from traditional tacos, burritos or bowls and making a Mexican inspired soup. Which has officially been added to the taco Tuesday rotation because it’s THAT good!

What is tortilla soup?

Well, beyond the fact that it has tortillas and soup, it’s a creamy thick soup broth filled with delicious garnishes like beans, corn, avocado, cheese and traditionally with some shredded chicken.

The broth is also generally made with some type of chilli, (traditionally ancho chillies) though today we’re using chipotles.

I like to think of this soup almost like a stew since it’s filled with so many amazing garnishes and makes a great filling meal!

How to make tortilla soup

If you’re making the tortilla soup in a slow cooker, you’ll want to add all the soup ingredients in the slow cooker and let that cook on low for 4-6 hours. Then transfer to a blender (or use a hand blender) and blend until smooth.

Now, let’s talk about the MOST important part of this dish…the homemade corn tortilla chips.

How to make tortilla chips:

Ok, so once you learn how easy it is to make homemade tortilla chips it will change your life!

And that’s it! Super simple and homemade tortilla chips are soooo good!

This soup is loaded with smokey chipotle flavour and topped off with homemade tortilla chips!

I use chipotle peppers in adobo for this recipe. 2 peppers will give you a pretty spicy soup. If you like it less spicy, stick with one. You can also use dried chipotle peppers.

The brown sugar is essential for that caramelized flavour in this recipe, so don’t leave it out!

The soup broth stores well in the fridge for a week. You can tore any extra tortilla chips in an air-tight Tupperware (if there are any!)

If you tried this Vegan Tortilla Soup or any other recipe on the blog let me know how you liked it by leaving a comment/rating below! Be sure to follow along on Pinterest, Instagram and Facebook for even more deliciousness!

This post contains affiliate links which means I will make a small commission if you purchase through those links. I only recommend products that I know, trust and love!
Fall Gluten Free Lunch & Dinner Recipes Soups & Stews Vegan Vegetarian Winter