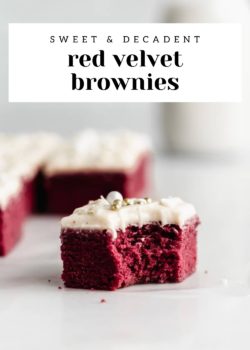 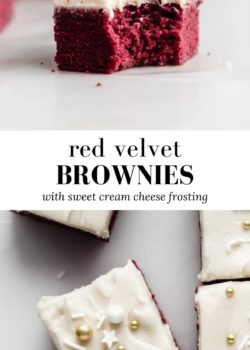 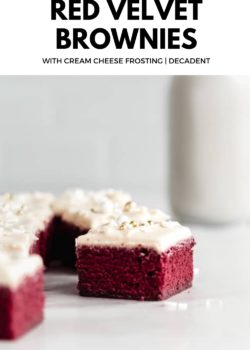 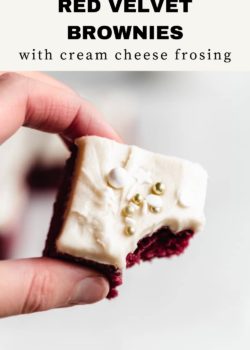 These Red Velvet Brownies with Cream Cheese Frosting are the perfect decadent treat! These brownies are easy to make and great for Valentine’s day or to make for a fun weekend activity!

This recipe is sponsored by Bob’s Red Mill.

With Valentine’s Day coming up I wanted to share Valentine’s inspired recipe that would be fun to make with your family or loved ones to celebrate.

These Red Velvet Brownies with Cream Cheese Frosting are not only pretty, but taste light and delicious.

Red velvet is sort of like a cross between chocolate and vanilla. The brownie batter has both vanilla extract and cocoa powder, but much less cocoa than a chocolate cake would have. The taste of the brownie base is much lighter than a traditional brownie, which pairs perfectly with the rich and fluffy cream cheese frosting.

These brownies are made with Bob’s Red Mill Organic All Purpose Flour, which is milled from certified organic hard red wheat. If you have a big sensitivity to gluten, however, I recommend using the gluten-free 1-1 baking flour in this recipe instead of the organic flour.

How to make Red Velvet Brownies with Cream Cheese Frosting

If you tried these Red Velvet Brownies with Cream Cheese Frosting or any other recipe on the blog let me know how you liked it by leaving a comment/rating below! Be sure to follow along on Pinterest, Instagram and Facebook for even more deliciousness!

These Red Velvet Brownies with Cream Cheese Frosting are a decedent treat to die for!

Make sure to level the flour so it is measured correctly. Too much flour can make these brownies dry.

If you want the brownies to be vibrant red, you’ll need to add a lot of food colouring. This is completely optional and just for the look.

The frosting recipe makes more frosting than you may want for the brownies (depending on how much frosting you like!) If you have leftovers, you can freeze the frosting in a ziplock bag and use it in the future.

This post contains affiliate links which means I will make a small commission if you purchase through those links. I only recommend products that I know, trust and love!
Desserts Fall Recipes Spring Summer Vegetarian Winter