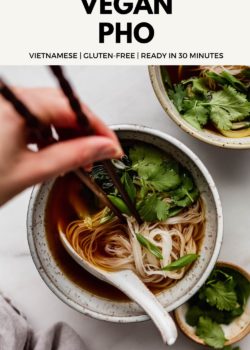 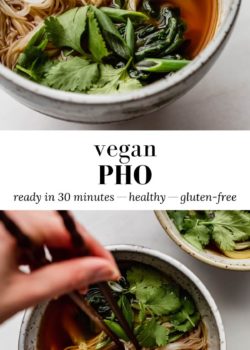 This Vegan Pho recipe is easy to make and is infused with warming spices like cinnamon and star Anis. It’s perfect to enjoy as an appetizer or to have a larger bowl for a meal!

Rather than making veggie stock from scratch, we’re going to use store-bought vegetable stock and infuse it with spices to save time. This is a trick I like to do for Asian soup recipes like this pho or this ramen.

A typical pho broth is not vegan, but you can make a very tasty Vegan Pho broth at home with a few simple ingredients!

What flavor is pho broth?

The main flavors in pho broth are charred onion, ginger, star anise, cinnamon and cloves. The broth is very fragrant and flavorful.

Is pho broth the same as beef broth?

Does this pho broth recipe have soy sauce?

Pho will often use soy sauce or fish sauce in it to season the broth and make it salty. Since this recipe is vegan, it uses soy sauce. If you want to make a gluten-free pho, just make sure to use gluten-free soy sauce.

What is vegan pho made of?

How to make Vegan Pho

Start by broiling the onion and garlic in the oven for about 15 minutes until blackened on top. Then add them to the pot along with the spices and mushrooms and toast for 1-2 minutes until fragrant. This will help to release the delicious flavours in the spices!

Cook the rice noodles separately and then plate the soup in the bowl with some rice noodles, bean sprouts and herbs.

What should I put in my Pho?

Traditionally a Pho recipe is served with a side of beansprouts, Thai basil and mint.

Though you can serve this Vegan Pho recipe with any type of vegetables you love. For this recipe, I use bok choy and beansprouts. Some other delicious veggies you could add to this soup are:

How to serve Pho Soup

Pho soup is traditionally served with rice noodles and a side of bean sprouts, mint leaves, Thai basil, lime wedges, hoisin sauce and sriracha that you can add to your soup as you wish. You can also add any vegetables you love to the pho or some soft tofu for some added protein.

It’s best to serve this Vegan Pho in a large bowl so the soup doesn’t splatter everywhere as you eat it. Pho is usually served with chopsticks to pick up the noodles and a large soup spoon to scoop up your soup.

Store this Vegan Pho in an airtight container in the fridge for up to a week. Store the noodles separately to prevent them from becoming soggy.

This Pho broth also freezes well. Freeze just the broth without any of the vegetables or noodles in it. Thaw on the countertop.

If you tried this Vegan Pho or any other recipe on the blog let me know how you liked it by leaving a comment/rating below! Be sure to follow along on Pinterest, Instagram and Facebook for even more deliciousness!

Broil or roast the onion and ginger in the oven before adding them to the pot. This helps to build up a really nice flavour and will give you a more flavourful rich-tasting broth.

This broth is even better the next day. Store it in a Tupperware in your fridge and enjoy it the next day for an even more flavourful soup.

Add some soft tofu to this recipe if you want some extra protein!

This post contains affiliate links which means I will make a small commission if you purchase through those links. I only recommend products that I know, trust and love!
Fall Gluten Free Grain-free Lunch & Dinner Recipes Refined sugar-free Vegan Vegetarian Winter