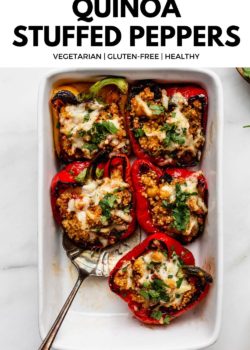 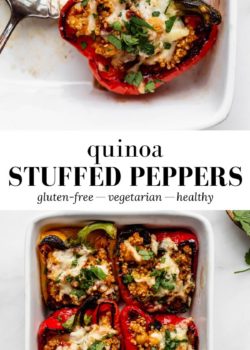 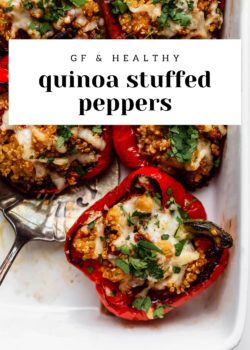 These Quinoa Stuffed Peppers are easy to make, healthy, and vegetarian-friendly. (with a vegan option too!) Make a batch for dinner and freeze any leftovers for another time.

This recipe for Quinoa Stuffed Peppers is great for a healthy weeknight dinner. Red bell peppers get filled with fresh Mediterranean quinoa and baked in the oven. Make sure to also try this stuffed pepper soup if you love stuffed peppers!

The secret to get flavourful cooked peppers is to pre-roast the peppers before stuffing them with the quinoa, and then baking them in the oven again.

How to make Quinoa Stuffed Peppers

While the peppers roast, cook the quinoa in a pot and start preparing the stuffing by sautéing the vegetables and sun-dried tomato pesto together. Then add in the quinoa and mix it all together.

Stuff each pepper with the mixture and top with some shredded cheese.

How long does it take for peppers to get soft in the oven?

Peppers will take about 15 minutes to soften in the oven at 425 degrees F.

Many stuffed pepper recipes will stuff raw peppers with a filling, then place them in the oven to bake. The problem with this is that the peppers don’t cook as well because:

This is why this recipe pre-roasts the peppers. Trust me, this is the BEST way to get roasted red bell pepper flavour into the dish.

Make Ahead Stuffed Peppers with Quinoa

Stuffed peppers are a great recipe to prepare ahead of time that can be stored in the fridge for up to 3 days before serving.

To prepare this recipe in advance just follow the instructions up until stuffing the peppers with the quinoa stuffing. At this point, you’ll tightly wrap the peppers with plastic wrap and place them in the fridge. When you’re ready to eat the stuffed peppers, remove the plastic wrap, cover the peppers with shredded cheese and bake in the oven at 400 degrees F for 15-20 minutes until the peppers are warmed through.

How to store, freeze, and reheat Quinoa Stuffed Bell Peppers

Store leftovers in an airtight container in the fridge for up to a week. Reheat in the oven or the microwave.

This recipe also freezes well. Freeze peppers in a sealed container. When you’re ready to eat them, let them defrost naturally on the countertop. Heat them up in a baking dish in the oven.

Which color bell pepper is the healthiest?

Do you have to cook peppers before stuffing them?

Nope! These peppers are lightly roasted before stuffing them to give the peppers a delicious roasted flavour. You’ll see some recipes that stuff raw peppers, but roasted peppers make for a tastier stuffed pepper!

What is the healthiest way to cook peppers?

All vegetables will lose some of their nutrients when cooked. (But don’t worry, they’re packed with so many vitamins and minerals you won’t be losing out on much.) Roasting or grilling peppers with is a great healthy cooking option that requires little to oil added oil.

How do you make stuffed peppers not bland?

It’s all about seasoning the stuffing! This is why we cook the quinoa in vegetable stock in this recipe. Seasoning each layer of ingredients used to stuff the peppers will result in flavourful and delicious stuffed peppers!

How do you make stuffed peppers not watery?

The trick to making stuffed peppers that aren’t watery is to lightly precook the peppers before stuffing them. This will help draw out moisture from the peppers. You can precook them by slightly roasting them in the oven, or boiling them in a pot of water.

There are so many delicious flavours that go well with stuffed peppers! Some great pairings for your peppers are garlic, onion, basil, oregano, thyme, cilantro, cayenne pepper, feta cheese and parmesan cheese.

What side dishes go with stuffed peppers?

Stuffed peppers make for a great meal on their own, but can also be served up with a variety of sides to make them more of a “complete meal.” Here are some great recipes you can serve with these Vegetarian Stuffed Peppers

If you tried these Quinoa Stuffed Peppers or any other recipe on the blog let me know how you liked it by leaving a comment/rating below! Be sure to follow along on Pinterest, Instagram and Facebook for even more deliciousness!

These Quinoa Stuffed Peppers are easy to make and packed with flavour!

Use even-sized peppers so all the peppers cook evenly. You can use any colour of bell peppers you like for this recipe.

Use larger peppers if possible. They have more space for stuffing!

Cook the quinoa in vegetable stock rather than water. This is one of the *secrets* to getting really flavourful quinoa in these Quinoa Stuffed Peppers.

Taste and season as you make the filling with salt and pepper. Depending on the brand of vegetable stock and sundried tomato pesto you use, you may need more or less salt.

This post contains affiliate links which means I will make a small commission if you purchase through those links. I only recommend products that I know, trust and love!
Fall Gluten Free Grain-free Lunch & Dinner Recipes Refined sugar-free Vegetarian Winter