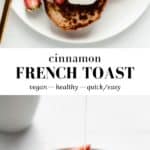 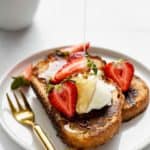 This Vegan French Toast is so easy to make, you won’t believe there’s no eggs or dairy in it! It’s crispy, flavoured with cinnamon, and can be made in 15 minutes!

An easy vegan french toast recipe anyone can make!

This Vegan French Toast is one of those simple recipes that feels like an upscale indulgent breakfast.

This recipe is healthy, and can be made with any type of crusty bread you love! It also contains no banana and is made with flax seeds as an egg replacement.

What kind of bread is best for french toast?

French toast comes out best when made with any type of denser crusty bread. A soft sandwich bread won’t work well for this recipe, since it would just become too soggy and not crisp up as nicely.

You can also use stale bread to make this french toast recipe. If you have some leftover bread that is a little bit dry, it’s perfect for using in french toast!

How to Make the Best Vegan French Toast

Whisk your wet ingredients together in a large bowl until well combined.

Dunk your slice of bread in the liquid mixture, and let it sit for 1-2 minutes on each side to soak up the liquid.

Add some coconut oil to a non-stick pan, and cook the french toast in the pan on medium heat for about 3-4 minutes on each side until crispy.

Serve up your french toast with some berries, maple syrup or whatever you like!

How do you make French toast without eggs?

What can I use instead of milk in French toast?

You can use any plant-based milk substitute instead of milk. Almond milk, coconut milk and soy milk all work.

What can I use instead of butter for French toast?

Vegan butter or coconut oil are the best substitutes for butter in french toast.

Enjoy this Vegan French Toast for a delicious breakfast in 20 minutes!

Use a non-stick pan to make this french toast to prevent the toast from sticking.

Cook the toast on medium heat rather than high heat so it doesn’t burn, and don’t peek!

Let it cook for a good 3 minutes on the first side before checking it.

If you tried this Vegan French Toast or any other recipe on the blog let me know how you liked it by leaving a comment/rating below! Be sure to follow along on Pinterest, Instagram and Facebook for even more deliciousness!

This post contains affiliate links which means I will make a small commission if you purchase through those links. I only recommend products that I know, trust and love!
Breakfast Fall Gluten Free Recipes Refined sugar-free Spring Summer Vegan Vegetarian Winter