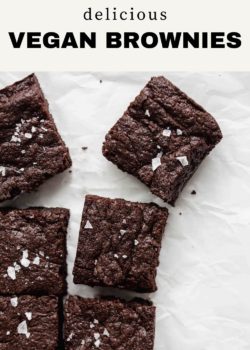 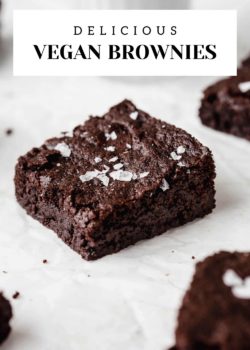 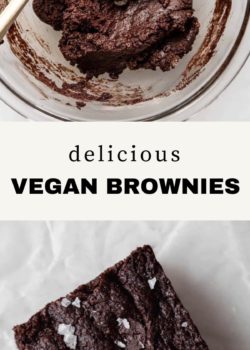 These Vegan Brownies are fudgy, chewy and seriously chocolatey! They’re made without eggs or dairy in them and are super easy to make. Whether you’re vegan or not, this will be your go-to brownie recipe!

I’ve done it. After lots of testing, baking, and getting chocolate all over my kitchen, I’ve finally put together the best homemade Vegan Brownie recipe.

What makes the best Vegan Brownie you ask? It needs to be fudgy (can we all agree brownies should be fudgy and not cakey?!), slightly gooey and MEGA chocolatey. I’ve come across many Vegan Brownies that completely miss out on all of these elements.

The key to achieving the perfect fudgy chocolate Vegan Brownies is:

What are Vegan Brownies made of?

What type of cocoa powder should I use?

Dutch cocoa powder. (more information on that below)

Natural Cocoa powder is more acidic and has a sharper taste. It is usually light brown in colour with an almond reddish tint.

Dutch cocoa powder is processed to remove the acidity (also called alkalized cocoa powder) so it has a smoother, silkier and rich taste.

What type of chocolate chips should I use?

How to Make Brownies without Eggs

Add the sugar, flour, cocoa powder, salt and baking soda to a large mixing bowl. Stir the dry ingredients together until combined.

Now it’s time to mix the wet ingredients together. Add the melted butter, flax egg, coffee and vanilla extract together in a bowl and whisk them together until combined. Then melt the dark chocolate in a small bowl.

Add the wet ingredients to the dry ingredients and mix together using a large spoon or spatula. You want to be gentle and fold the batter together until it’s well combined, then add in the chocolate chips.

Let the brownies cool completely on the countertop before cutting. Cut into even squares.

Since vegan brownies are fudgy, they can sometimes be a little trickier to cut if you don’t have the right technique. So let’s review the secret to easily cut brownies.

Should vegan brownies be refrigerated?

Counter: store leftover cut-up brownies in an airtight container at room temperature. Brownies will keep for up to 4 days but are best enjoyed within 2 days before they start to dry out slightly.

How to freeze brownies

Did you know you can freeze brownies? For freezing, it’s best to freeze the brownies before cutting them to prevent them from oxidation and freezer burn. Freeze for up to 3 months.

To freeze a whole pan of vegan brownies, let the brownies cool completely then tightly cover them in plastic wrap. Place in the freezer-safe bag and store in the freezer.

To defrost brownies from the freezer remove the whole pan or individual brownies and let thaw on the countertop. (Brownies are also pretty tasty eaten directly out of the freezer too!)

What is the key to fudgy brownies?

The key to making fudgy brownies is to have a higher fat to flour ratio. This means using less flour in the brownie batter than you would to make a cakey brownie.

These brownies are a dessert, so I would describe them as “healthy” per-say. But everything in moderation is perfectly good for you!

How can you tell when the brownies are done?

Can I freeze leftover brownies?

Yes! Brownies freeze really well. To freeze them tightly cover in plastic wrap then place the brownies in a freezer bag and freeze for up to 3 months.

Can I make these brownies gluten-free?

If you tried these Vegan Brownies or any other recipe on the blog let me know how you liked it by leaving a comment/rating below! Be sure to follow along on Pinterest, Instagram and Facebook for even more deliciousness!

These Vegan Brownies are AMAZING. They’re loaded with chocolate and perfectly fudgy. Everything a brownie should be!

Store in a sealed container on the counter for up to 4 days.

Let cool completely.  I know it’s tempting, but don’t slice into the brownies before they cool. Otherwise, you’ll end up with a mess.

This post contains affiliate links which means I will make a small commission if you purchase through those links. I only recommend products that I know, trust and love!
Brownies & Bars Desserts Fall Recipes Spring Summer Vegan Vegetarian Winter